Somehow, unbeknownst to me, and although I’ve been here, watching, the entire time, several years have flown by and now our youngest — the teeny, tiny baby — has turned 7! 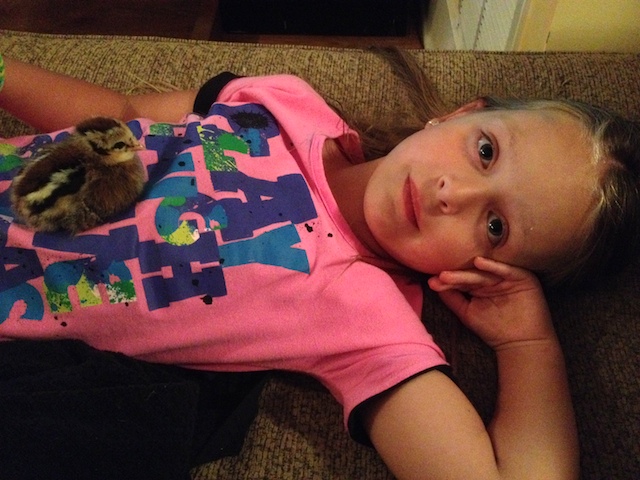 Not unlike the little lump of baby chick roosting on the hollow of Echo’s solar plexus (which was purchased with 4 others on Echo’s birthday), our little lump of baby came to us those several years ago, and lay nestled on her mom’s chest. And I’m sure she was just that same lump until — well, last week — right?! 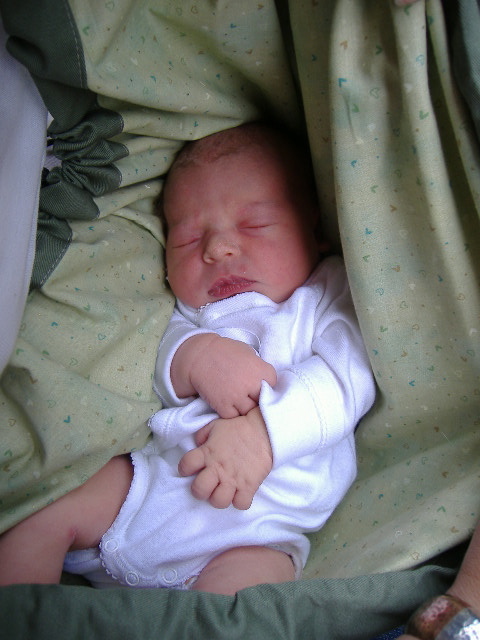 Nevertheless, even though there’s obviously been some ridiculous mistake or ill-conceived time-warp involved, we celebrated Echo’s 7th birth anniversary this week. We’d planned together to give her a day of all her favorite things — favorite activities, favorite foods, and full, uninterrupted access to us all day long (i.e. no work or “grown-up play-stuff” distracting us). If it gives you any idea, I started the day performing a made-up birthday song to the tune of “The Gambler” by Kenny Rogers that went something like: “It was 7 years ago today, in the town of Missoula, a little girl was born, and Echo was her name.”

Here’s how the various celebrations looked:

On her birthday morning, after a treasure hunt leading to the only actual “present” that we got for Echo this year  (I’ll explain more in a minute…) which was a 2.5-foot tall stuffed giraffe baby for the 5-foot stuffed giraffe that she got for Christmas, and after opening a gorgeous card Natalie made her, Echo opened the only other “mostly jokey present” that we got her. 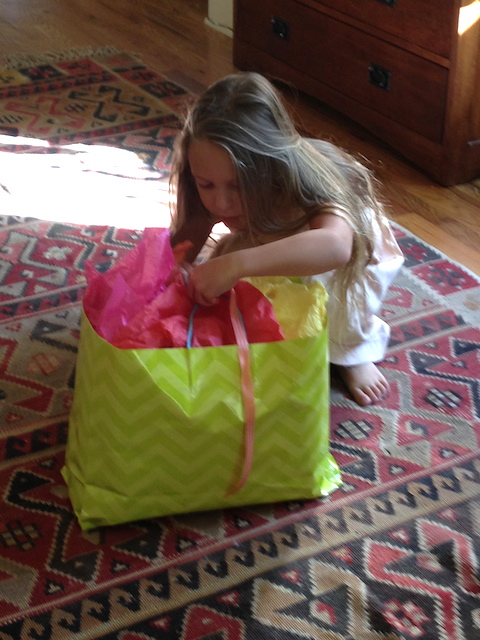 She and I had recently put together a Mother’s Day package and had joked about how funny it would be to wrap a small present in bunches and bunches of layers of box, paper, and packing material… So for her birthday, I did just that, for her. The bag above had a sizable, double-wrapped gift box buried under tissue paper inside it. The box had more layers of tissue paper covering about a dozen gift bags that were fit one-into-the-other. 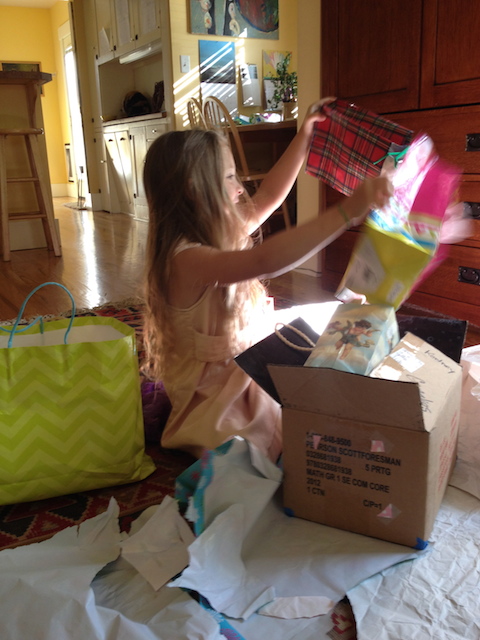 And inside the last bag was… 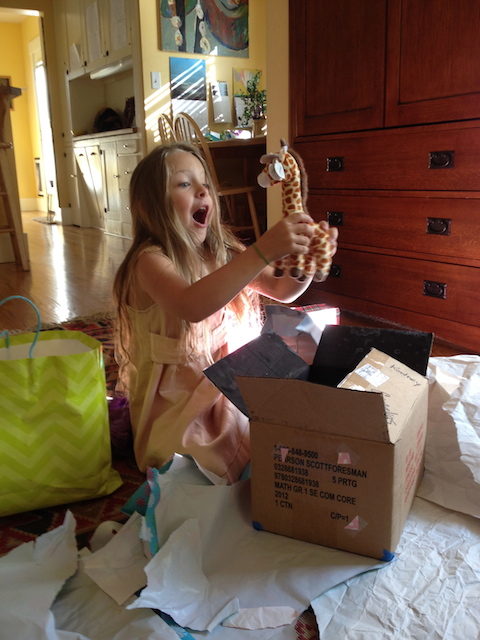 a teeny stuffed giraffe for the new baby, of course!

After opening a few presents from grandparents that morning, one of Echo’s other plans for the day was to go on a hike, or as she put it, “Be out in Nature”. Here, she’s sporting the new field vest and tools she got from Grandpop Michael, with her trusty compass on the end of the ribbon tied on her left. 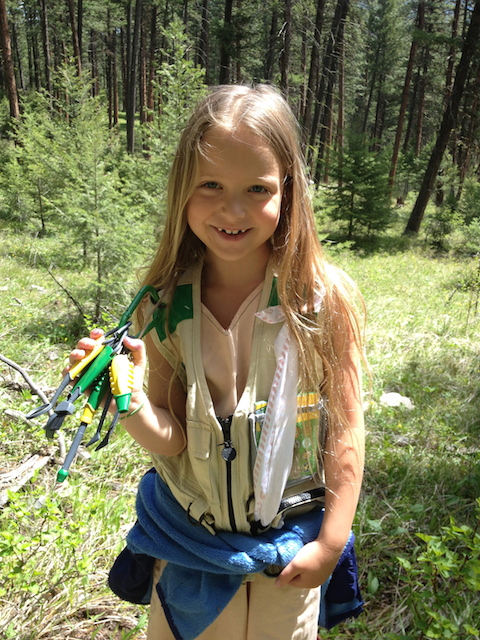 Here, she’s giving some loving to an old tree-friend of ours. We call him/her Grandfather Tree, but after being in Redwood country for three months at the beginning of the year, it was a little hard to think of anything smaller than those mammoths as “Grandfather”… We traded some strands of deer fur that we found for some of Grandfather Tree’s pitch, gave some tree-hugs and thanks, and passed merrily onward. 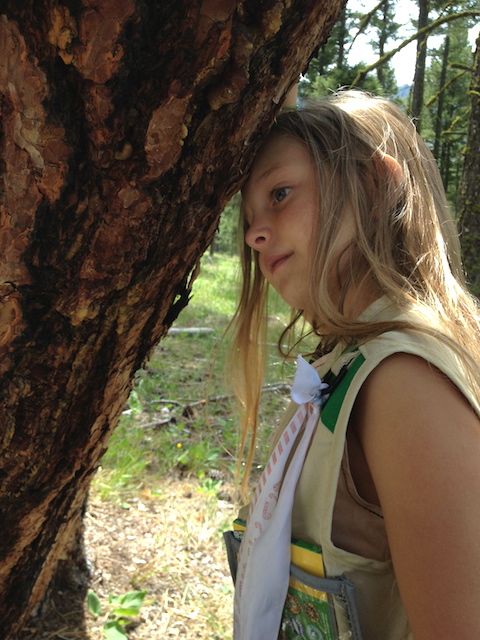 It’s so hard to tell that these two are related, ain’t it? 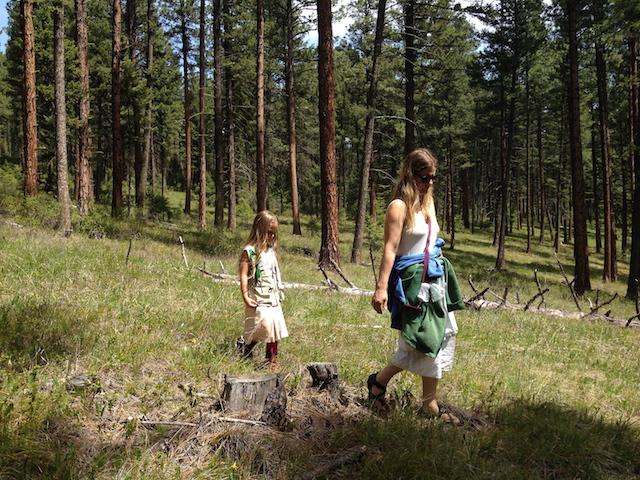 Be honest — you almost expected to see a teeny stuffed “blonde hiker” just a few paces behind Echo, didn’t you? 😉

Over the following couple days, the presents continued to trickle in, and the celebration endured. Xi showed up the evening before the big party in order to get in on the general festivities, give her sister some extra birthday fun, and help us set up for the party. Between Echo’s involvement in Girl Scouts, Y-Soccer, and Xi’s previous Montessori school, there were something like 30 kids invited to the official shindig. So, rather than getting multiple piñatas, three dozen gift bags, and an even bigger pile of presents for Echo — we (brilliantly, I might add) decided to just put all of our proverbial eggs in one basket, and we rented a bouncy house! 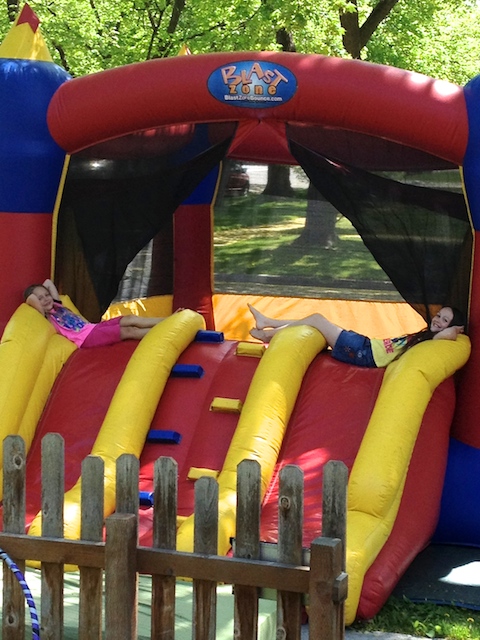 We’ve never done anything like it before. We’ve probably even thought of the possibility as a ludicrous kind of overkill in the past. But once we settled on the idea, it became clear how much easier it was going to be on us, and on the other parents whose kids go to something like 40 birthday parties a year and who can really only handle so much birthday detritus before making significant contributions to the landfill… And the other thing that became clear, once the bouncy castle was set up, and certainly after the kids all arrived, was just how much fun it was for all of them — like, unbelievable-epic amounts of fun…

Fortunately for us, we had the thing delivered and set-up an hour before the party, so we got to enjoy it a bit before it was overrun with flying kidlings! 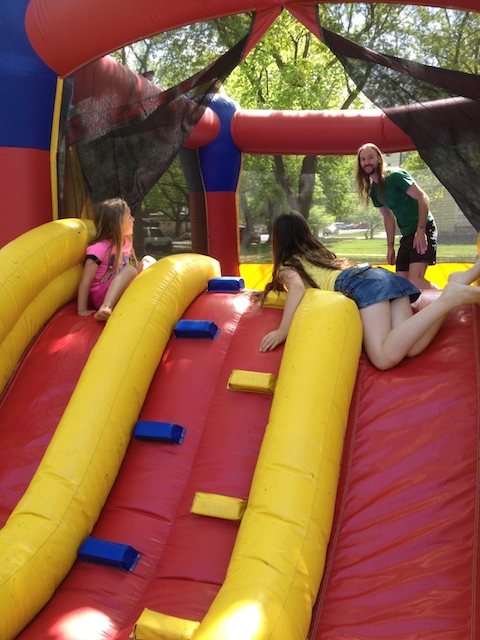 They played and played and played for almost 3 hours straight. Various games and pretends ensued — castle-seiges erupted, faery realms were held in a turbid balance, royal maidens were dragged away, only to be saved and brought back at the last second! All amidst a nearly constant roar of glee and the ever-present flying of little bodies through the electric air. 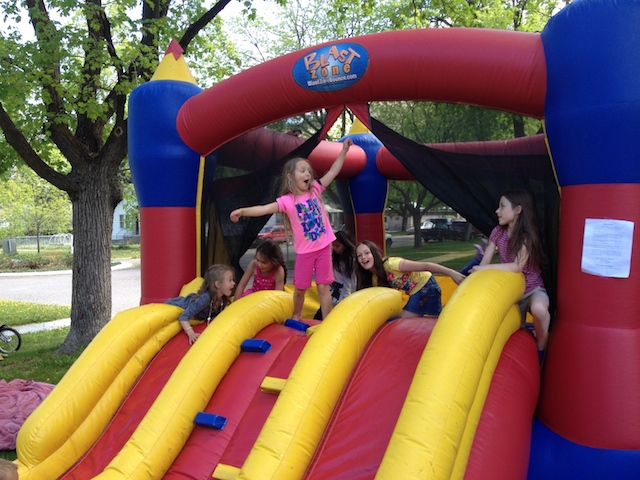 Near the end of the party (because we couldn’t tear them away from the bouncy house sooner) there was a two-part barrage of gifts Echo had to wade though (poor dear…). It was actually so fun to see what her friends picked for her. Lot’s of flowers, a frog dissection book, craft kits, and 1,000 live ladybugs for the garden, among other wonderful and Echo-appropriate items… 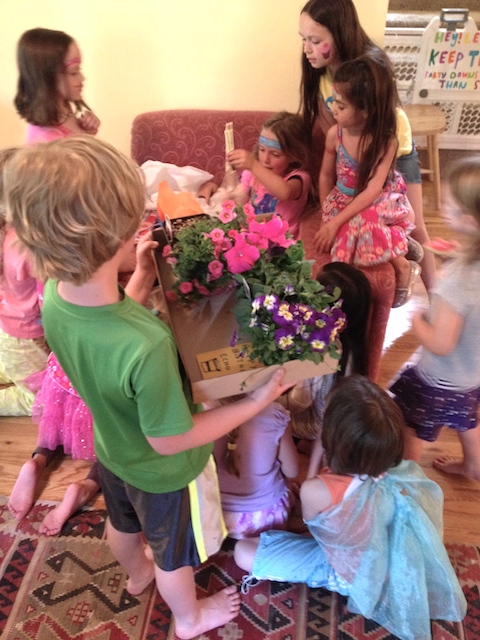 Then it was cake time! Now most of you who’ve been following this blog for any length of time have seen at least one, probably a dozen, of Natalie’s amazing cakes. This year, Echo had requested a river theme for the whole party, so Natalie crafted a 4-foot-long, winding, undulating, fish-and-frog-stocked, two-layer, lemon with lemon curd filling and blue vanilla frosting river cake. She added gummy fish and frogs, graham cracker crust “dirt” and multic-colored chocolate “rocks” on either side to finish the amazing effect.

You can’t see it, and for some reason we have no other pictures featuring it, but there is also a river of blue and green streamers and more than a dozen painted fish hanging from the ceiling above everyone in the dining room and adjoining kitchen and living room. So we had one heck of a river-thing going on! You may also note that of all the face-painted kids that Natalie did special-requests for during the jumping frenzy which are sampled below — Echo opted for the river-across-the-forehead-and-down-the-side-of-the-face option. She’s also got a prism rainbow cast across the corner of her mouth… 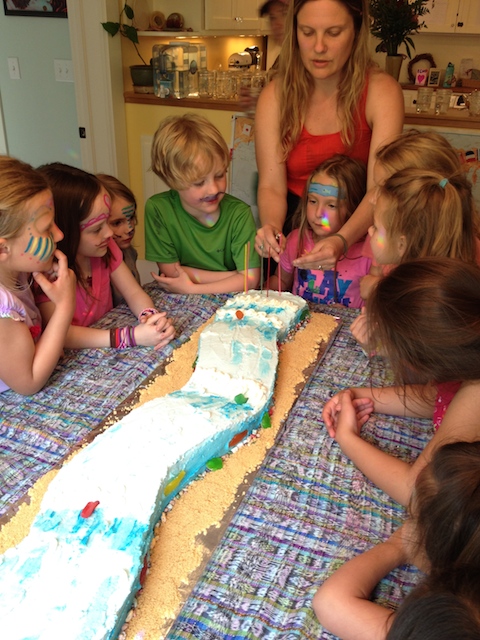 The bouncing re-ensued immediately following the cake feast, but it wasn’t long before the castle tech showed up to begin taking the wind out of the party. We yelled for everyone to do their “last best moves!”, there was one more major ruckus, and then they all came bouncing and tumbling out.

Hugs were given. Farewells were fondly bid. Many a thanks was tossed back and forth. Xi’s mom even came and picked her up. And then it was suddenly silent.

The three of us snuggled up and relived parts of the day that we’d especially enjoyed. We ate dinner and watched Echo’s requested birthday movie, James and the Giant Peach. Then in the waning light of the perfect day, we set a thousand lady bugs free in our garden. They fluttered and flew and crawled about, finding good spots to cozy up, good juicy pests to eat, and good mates to make babies! 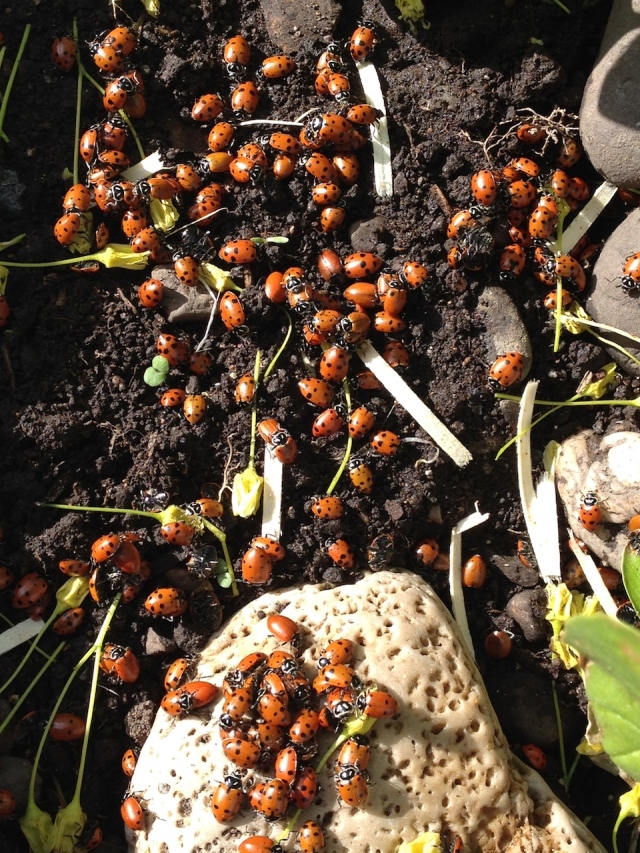 All in all, it was a pretty magical way to celebrate this girl turning suddenly, beautifully, brilliantly 7. 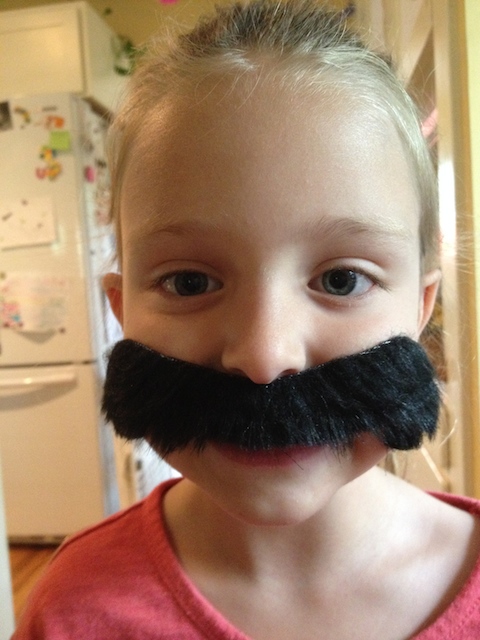 I am a full-time parent of three, Writer, Life Coach, Lecturer, Parenting Mentor, and Shamanic Practitioner. In all of the above, I am seeking to assist my fellow humans in their processes of claiming and unleashing their highest potentials.
View all posts by Nathan M McTague, CPCC, CPDPE →
Gallery | This entry was posted in Beautifulness and tagged birthdays, blast zone bouncy houses, children, family, family fun, life. Bookmark the permalink.