The Gospel according to Charlie Darling — Boat Life!

Missoula is a powerful place. I’ve said it before and I’ll say it again. As a town, Missoula is nearly unparalleled in it’s offerings for families — including enrapturing activities for all, and for each of, the members of the family; beautiful landscapes and outdoor venues to explore in every direction; as well as an ultra-rich hub-community of some of the most interesting, diversely oriented, and simply kind people ever collected in one place. At our favorite café, Butterfly Herbs (right in the heart of downtown), we personally get to mix, mingle, and make friends with the cream of the proverbial crop of Missoula characters.

One of our long time friends, originally met in Butterfly, and of the eclectic 20-something crowd that frequents there, is Chris Judge. I’ve had the pleasure of working with him in a few different capacities over the years, and our mutual respect and admiration have steadily grown. One of the many things that Chris does extremely well is drag queen performance. I’ve seen him in several different incarnations, with different stage appellations, but the over-arching character that seems to contain them all is Charlie Darling. 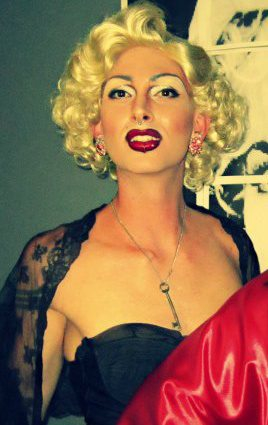 Charlie is a powerful person. She has her own way(s). Among other things, she has a broad, positive, life-engaging philosophic which she has generally referred to as simply “being Fabulous!” Charlie exudes confidence and grace and style, as well as a Mother-Theresa-Bodhisatva compassion that makes her an irresistible character. Over the years of working together, she and Chris have had their effect(s) on one another. And I think Chris wouldn’t mind me saying that Charlie Darling has taught Chris some important lessons about how Chris wants to live his own fabulous life. One such lesson is what a number of us Missoula folks are starting to refer to as simply “Boat Life”.

Boat Life is a manner of interacting with life which is (as far as I can glean from my investigations) quintessentially characterized by the metaphor of the name itself — to live as one would live life on a luxury boat. The concerns are small, the days yawn, the mood is light, the work is pleasure. Waves come and go, shorelines change around you, and you sail buoyantly along. As a philosophy, it’s something Natalie and I have very much taken to heart. It matches very much with a sense we have (from our other life investigations) that  life really is all about how one perceives it, and that the way to have a life that feels good is to see life as good.

Boat Life is a powerful-good life. And so we’ve been keeping the concept in our minds quite a bit. Even just taking a moment to turn up the volume on the moments that feel really good — like sitting by the river with my family watching tubers float down in an endless caravan while feeling the sun warm my shoulders and the water cool my toes — and really enjoying every last drop of it by calling it Boat Life. I look over at Nat and say “Boat Life” once a day the last few weeks. And she nods and smiles and says, “Boat Life” back.

So that’s the long version of the introduction for a quick sharing of our family camping trip photos — which are an ode to Boat Life:

We went to a gorgeous little lake a bit north of Missoula called Lindbergh Lake. It is part of a series of lakes in the area that are frequented by summer recreationists, but, largely for it’s “rustic” lack of RV amenities, it goes mostly unnoticed. I’ve been there about a dozen times and never had trouble getting a good spot. I’ve even come a few times when Butterfly Herbs has it’s annual company (alum and friends) camp-out there, coincidentally, enough… 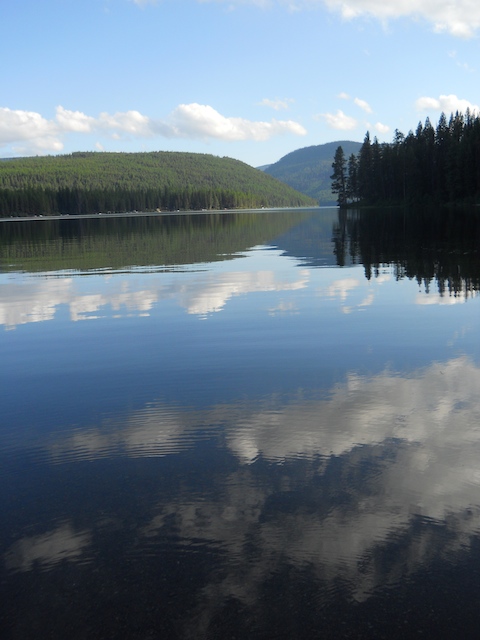 I think it’s the smallest of the “usable” lakes in the area, but also the prettiest, quietest, and most easily accessible to the widest spectrum of lake-goers. This is the view from the “rustic” boat launch ramp, which doubles as a swimming area complete with kid-friendly slow-depth-change technology for those little ones just getting the hang of swimming. But there are also tons of little spots along the lake that are easy access for swimmers as well… 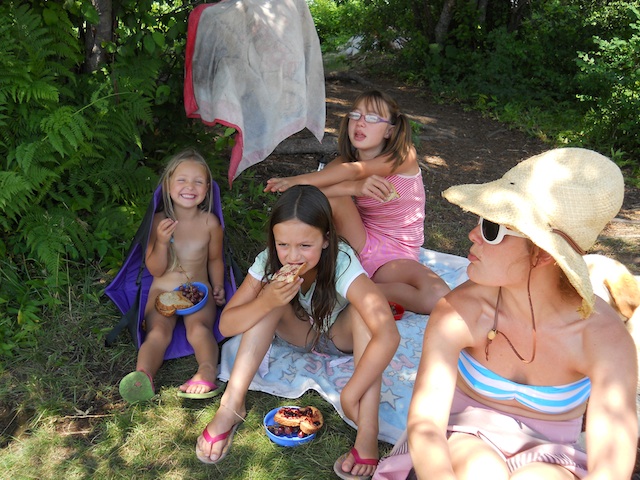 We waited for most of an hour for the day-picnickers who were using the camp spot we wanted to finish up and move along and then we swooped in (just as some other soon-to-be-campers were arriving), solely so that we could have the groovy campsite that has it’s own backdoor beach. The foot path leading away behind the ladies, here, goes another 40 feet to our tent, Eric, (which you can just barely make out through the brush above Bella’s head). This is Boat Life for sure. We sauntered our way from camp, lunch bowls in hand, and plopped down in the plush grass in the dappled shade at the sunny water’s edge and just sat together for a long time, talking and laughing and gazing. 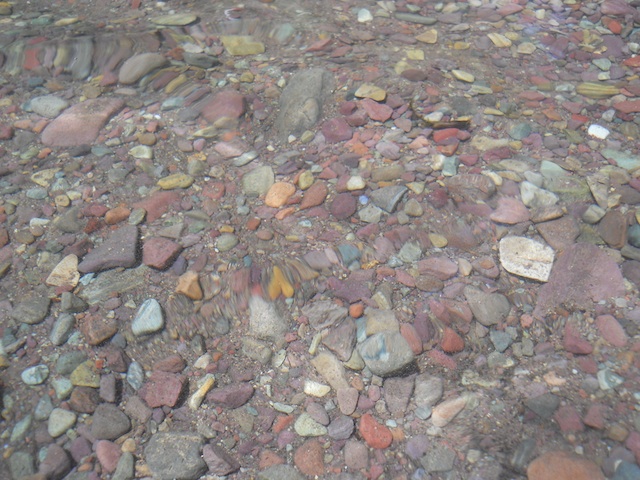 This was what I found myself gazing at quite a bit as we sat there. The beach was a delicious blend of pebbles and sand that mesmerized me for quite some time. I even found myself at the bank of the lake on our last morning, just digging my hands in, grabbing as much as I could, and spilling stones into the shallows over and over again. It felt like gratitude.

Bella and Xi were very nearly obsessed with firewood this time. From collecting to burning every last splinter, they were avidly involved and actively pursuing training. So I got them to watch me sawing some (to get those mirror neurons going!), and then walked each one through proper technique, held onto the saw with them for a bit, and then set them loose. They mowed through every dead stick smaller than my calve in the entire surrounding forrest. They sawed so much that I ended up feeling a little left out and had to surreptitiously go for some logs when they weren’t looking…

They even started refining their firewood processing such that, not only were they sawing and stacking logs neatly out from under-foot in piles loosely according to size, but they also started making a pile of wood shavings and bark for kindling and free-for-all tossing once the fire got going… Xi is peeling a fruitful mini-log, above, while Bella takes her turn at sawing. 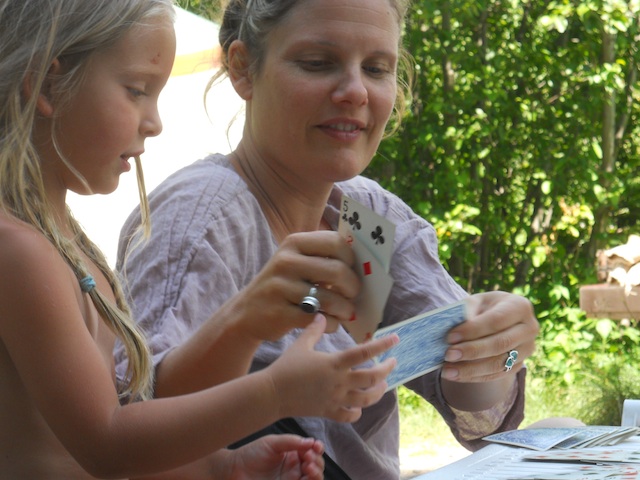 One of the other things we got to teach the girls about in camp life is card-playing. Particularly in this case, Solitaire. I almost included a second photo of this same scene just so that you could see more clearly that Echo is sitting on the dog food bucket, Natalie in the camp chair, and the cards on the cooler (because the table wasn’t in the shade…) — in true Boat Life camping style. Also, you should know, that’s squished berry on Echo’s forehead, not the remains of a vicious mosquito attack. 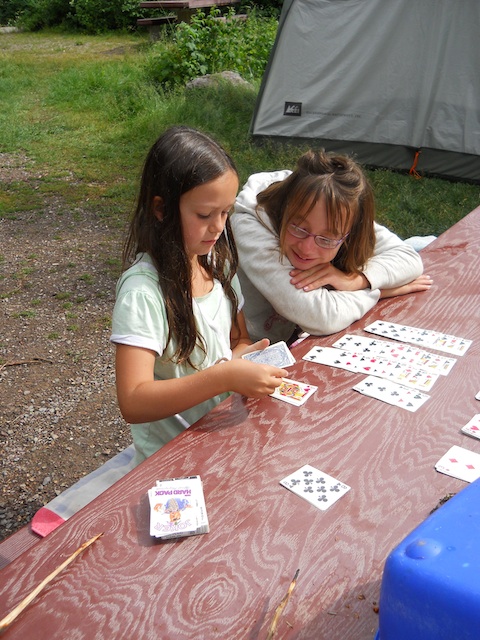 As someone who has traditionally (since teenhood) abhorred games of most kinds, including card games (though I have made my peace and will play games a bit since parenthood), I was absolutely amazed at how many games of Solitaire got played during our three day, two night trip. It was so fun to see the kids (and Natalie when she got a game in edge-wise) playing such a simple, old-school, wholesome game — no ipod, no dms (whatever that actually stands for…), in fact, nothing much higher tech than we grew up with the whole time we were there — except maybe the water-filter, thank REI… The modern twist, of course, is that Bella knew how to play Solitaire already, but had never seen it not on a computer screen.

All in all, a sublime trip. We were well prepared. We were fortunate. And we were clear that we were simply there to be there together. No fuss, no muss (whatever “muss” actually is). Pure unadulterated Boat Life.

The kids want to know how soon we can go camping again. And so do I…

Thanks, Chris and Charlie, for spreading the good word — you’re modern Zen at it’s best. And thank you as well, Lindbergh Lake, you’re a real gem, and we’re so blessed to know and love you. And thanks, family, for being so awesome.

Here’s hoping you all get to enjoy some Boat Life soon, too!

I am a full-time parent of three, Writer, Life Coach, Lecturer, Parenting Mentor, and Shamanic Practitioner. In all of the above, I am seeking to assist my fellow humans in their processes of claiming and unleashing their highest potentials.
View all posts by Nathan M McTague, CPCC, CPDPE →
This entry was posted in Beautifulness and tagged attachment parenting, building connection with children, camping, charlie darling, children, family, family fun, gratitude, life, parent-child bonding, parent-child relations, parenting, simple pleasures, YES!. Bookmark the permalink.