What a whirlwind just living can be sometimes, huh?

Since last I posted, I have been through such an interesting, pivotal, and delicious time that I could spend a couple thousand words just filling you in. But I’m not going to do that exactly… What I will do is shower you in pictures of our recent adventure to Pickathon. Some of you may remember this phenomenon from last year’s post, but wait’ll you see the pictures from this year.

Before I get to that, though, I wanted to just mention something real quick first. After my last post, I got to thinking (it is often the case that I dwell on posts after the fact, which is one of the benefits of doing it in the first place), I told you about how I was enjoying recharging my batteries (mostly by allowing myself to be super present with my family), what I didn’t mention is that Natalie and I have made it our practice to find methods and activities for meeting our family’s needs (individual and collective) that both economize our use of energy and/or offer us an opportunity to recharge while involved with the family activity. It may sound too complicated to bother with, and it does indeed make things a bit more complex at first, but only until you are able to switch from thinking about it activity by activity to just living it as a perspective.

So for example, in the yummy heat of a Missoula summer, we know we can meet all of our needs for fun, and sun, and ease, and natural beauty, and exercise, while also giving us parents some time to feel relaxed, by just gathering some towels and suits, a few snacks and some water, hooking up the bikes and peddling down to the river. We can stay there for hours if we want, and the girls will be utterly enthralled, and we can all be together, at the same time as Natalie and I get our batteries recharged by our own experience of the river. Other examples include: going to the park, getting together for a regular play group, going to our favorite café, visiting family, and going to events like Pickathon (I promise the pictures are coming). Going to the carousel is another great example of a different kind — it’s one of those activities that all the girls and I can do together, and because it doesn’t really work for her, Natalie usually uses that time to do something else — which is, of course, another way to meet more needs. Remember, though, it isn’t about having enough examples of what to do in this case, it’s much more about shifting perspectives to see the manner in which we can all get what we need from all of the activities — even if that means sitting out for the activity, choosing some you might not otherwise, or choosing a method for doing the activity that makes it more unanimously satisfying.

And without further ado, here’s a chunk of photos from Pickathon, perhaps the most eco-and-family-friendly music festival ever: 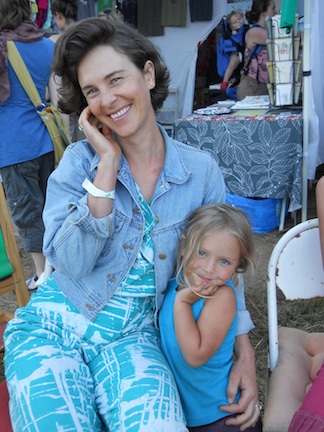 This is our Emily. She’s Natalie’s sister, and the reason we found out about and fell in love with Pickathon. She’s also the reason we get to go to Pickathon at all, as she has a booth to sell her clothing line there and “employs” Natalie and I to help her run it (the kids get in free!).

Here is said booth. And, as you can see, Natalie and Xi are busily “working it”. 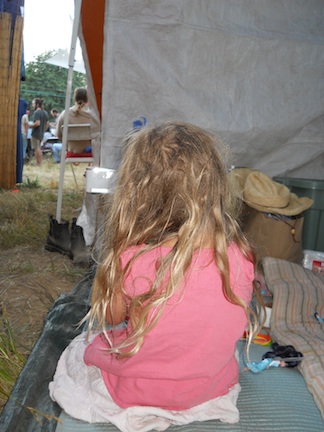 Behind the booth, we had our own “break room” where the kids could play and read, where we had snacks and cooked meals, and where the adults could decompress whenever necessary. That’s the back of Natalie sitting in the chair up front. Behind Echo and the “break room” was…

home. It was pretty darn convenient, to say the least, to have home and work so close to each other, but still separate.

Emily let Natalie share some booth space as well this year for the stuff that Natalie has been making and selling at the Saturday market in Missoula. You can’t see the real glory of the tiny food items, here, but it’s a full produce spread, just like at the farmer’s market, with some miniature baguettes, cakes, pies, and cupcakes to boot. Recently she’s added the earrings, also with mini produce and cupcakes, and faery wands for human kids (the streamers you see in the foreground above are part of those). So, not only did we get to go with Emily for free and help her, we also made some money while we were hanging out there doing exactly what we would already be doing.

Here, Xi and Natalie are making some sales… 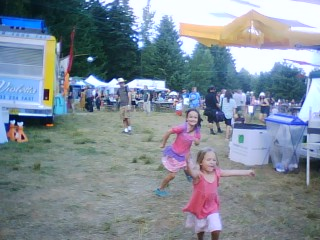 And here is Xi and Echo having some “off time”. 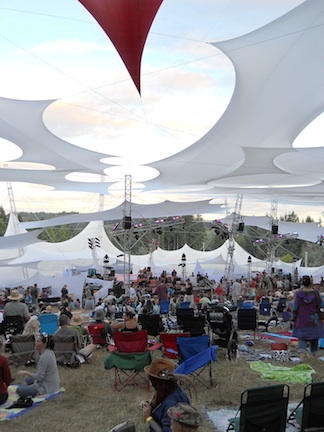 Across the little midway from the booth, and down the slight hill, were two stages that kept revolving acts throughout the day and into the evening, when the music got turned down and/or inside for the night. This meant that, just by sitting by the booth, we were also watching and hearing great music all day. 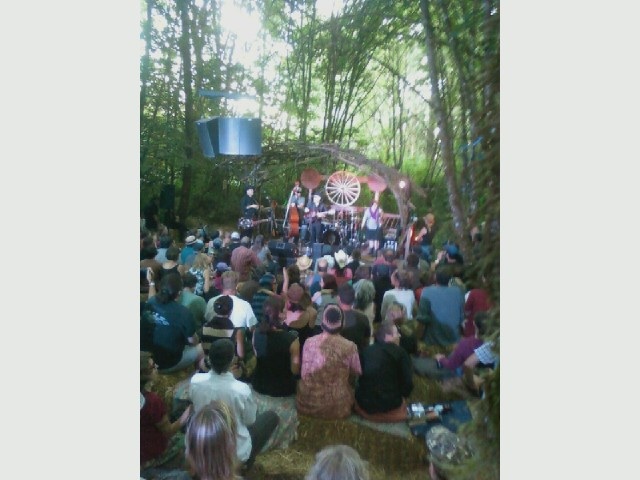 There were a total of six stages on the farm that becomes Pickathon. This one was off in the woods among the tent neighborhoods of the campers, and like the two main stages, it only had music going through the day. When there was a band or other performance there (like the Saturday morning kids’ show) that we wanted to see, then some faction of our booth-group would hike down while the others kept shop. 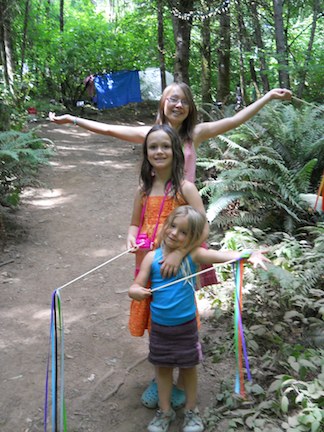 While there was plenty to do, between boothing and enjoying the music, there were also other daily activities of which we took full advantage. One such activity was our daily faery adventure, when Bella, Xi, Echo, and I would wander off up one of the many winding and interwoven trails criss-crossing through the lush woods crowning the farm. We would pretend various things, either looking out for trouble or carrying out a mission to find some sacred artifact, and as much as possible, we would stick to trails we had not yet tried. 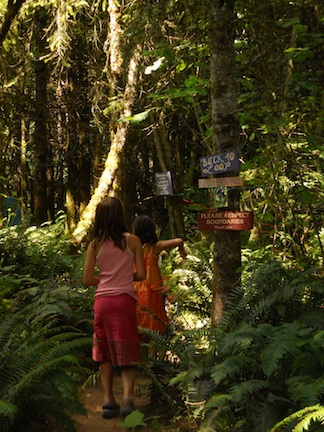 In the woods were neighborhoods and enclaves of campers, thinning out to just tents here and there as we neared the outer boundary of the camping area and trail system. The boundary was well marked and the markers themselves indicated that the boundary was there to protect natural habitat, which I really appreciated (both the information and the protection) as just more of the many ways the organizers of Pickathon are making sure the festival itself is sustainable. 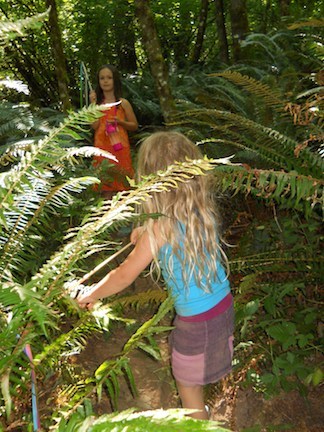 In addition to tents, and nature-protections, there were various other sights and discoveries we enjoyed during our adventures. One such sight was these giant ferns. In many places, Echo needed us to part the fronds just so that she could see to get through and safely pass.

One of our other discoveries was this giant slug on the trail. We stood over it for several minutes, watching it move, discussing it’s features, wondering how that bug got stuck on the back of its head. Bella (as per her usual interest) asked if she could poke it. We all agreed that she could — gently — and we marveled at how the snail would immediately “slime up” in the place where she touched it. 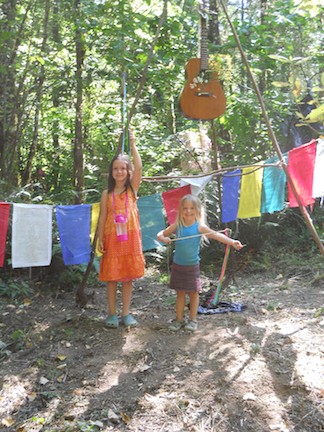 Another thing we discovered was the Music Camp. Musicians would gather here each night for quiet little backwoods jam sessions. I caught one on the last night we were there, and in it’s own quiet way, it rivaled anything I’d seen on any of the stages over the weekend. There were other camps, too, the security camp, the staff camp, in addition to numerous other friend and group camps.

This was one of the neighborhoods just barely into the woods. They’re big on “in-filling” there.

After our adventures, we would come back to the booth and recuperate for awhile, have a snack, and then continue on in our multi-faceted enjoyment.

One of Bella’s most consistent activities was practicing her hula-hoop skills. She got in probably 2 hours a day all together. 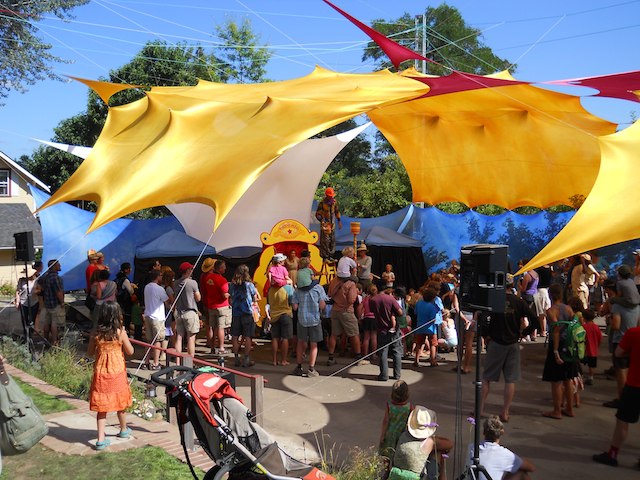 Another of the girls’ favorite activities was Circus Camp, where they could go for multiple hours each day and play with all sort of different circus-style equipment — from stilts and uni-cycles, to rhythm-sticks, hula-hoops, and “spinning plates”. 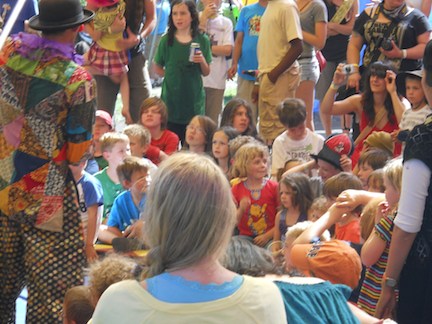 In the center of this photo, you can see Bella and Xi watching as the Circus Camp workers put on a clown show, which was another of the weekend’s attractions. 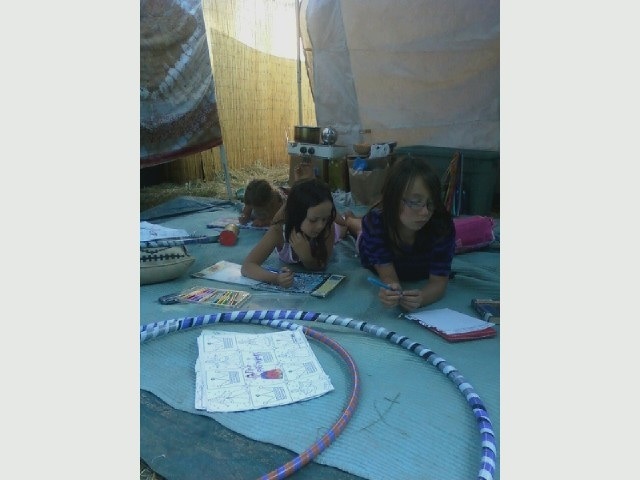 In between all of our many excursions, and meanderings, and boothing, their were lots of other fun kid activities. The girls got to join in on some craft-making, where they fashioned rain sticks, and these hula-hoops. They also spent a good bit of time entertaining themselves with drawing, coloring, playing with some toys we brought, and in Bella’s case, a little letter-writing as well. 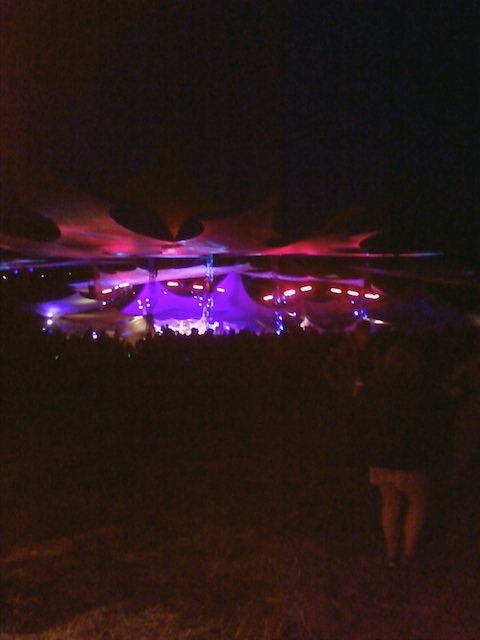 At night this was our main view.  Eventually each day would give way to darkness, but the music would just get a little quieter before it continued into the early hours of the next morning. Each night when I would crawl into tent and cozy mummy-bag, and lay down to drift off, I could hear mini jam sessions and eruptions of laughter in the woods around us throughout the night, until just before dawn, and then shortly thereafter the sounds of people waking up and beginning again.

We were there for three days in the middle of our Portland trip, but in many ways, Pickathon was the whole trip. It had/has such a blissful effect on all of us that even if we weren’t going for any other reason, Pickathon is more than worth the 9 hours it takes to get to Portland from Missoula. In fact, we even saw some Missoulians we know while we were there…

After the Pick, we headed back to Emily’s for some industrial hosing and quiet. We took a couple trips to the river, ate a bunch of local seasonal produce, and hung out with friends. Bella and Xi also made some faery clothes and a faery welcome station at Emily’s house. 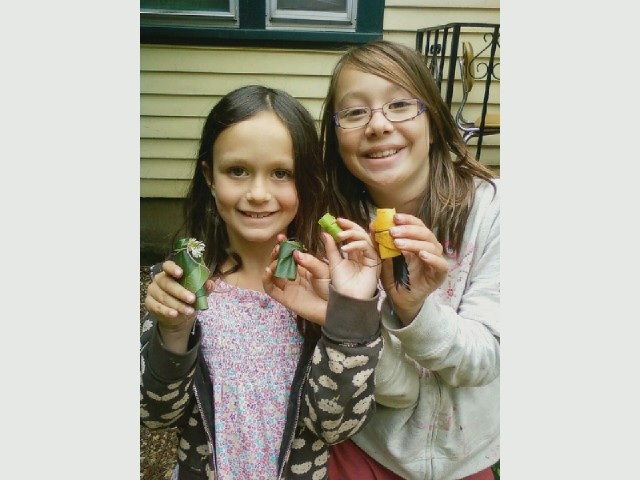 Here you can see the Fall collection for the McTague girls’ Faery Fashion Line, made exclusively from found natural materials, and some thread (faery thread, that is).

On the long drive home, we decided to do the virtually unthinkable (for us) and stopped in for a fast food feast a la McDonald’s. And we even made sure to pick one with a McPlayland for me and the kids.

All in all, it was such a stellar trip that I wish we hadn’t gone yet… Though I guess it’s not too early to start looking forward to next year.

On the way home, Natalie and I talked about what we would do differently next year, if we’re millionaires by then. We were both pretty pleased that there isn’t that much we would change. We talked about flying instead of driving, and/or maybe renting or buying an RV instead of tent camping, and trying some of the amazing food sold there instead of bringing all our meals.

One thing is for sure, though… 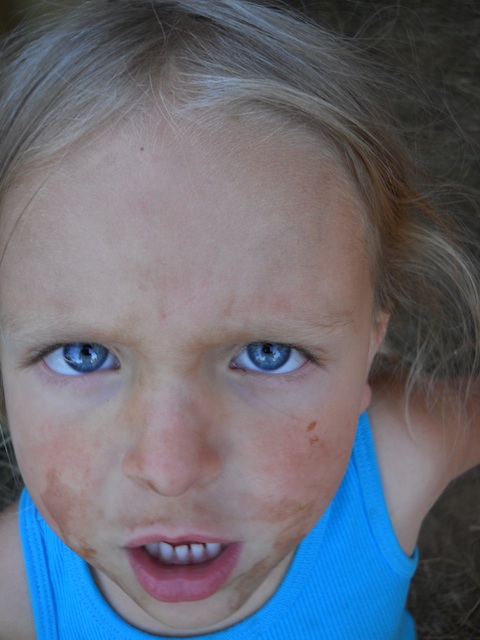 we will be bringing more handy-wipes.

And in terms of our family activities, we’ll also keep looking for more ways to make sure there’s something for everyone. Call it sustainable family practices.

I am a full-time parent of three, Writer, Life Coach, Lecturer, Parenting Mentor, and Shamanic Practitioner. In all of the above, I am seeking to assist my fellow humans in their processes of claiming and unleashing their highest potentials.
View all posts by Nathan M McTague, CPCC, CPDPE →
Gallery | This entry was posted in Beautifulness and tagged attachment parenting, children, faeries, family, family fun, natural parenting, parenting, Pickathon, Pickathon 2011, play, simple pleasures, YES!. Bookmark the permalink.