Get Your Cro-Magnon On

New Parents! This next ditty is mostly for you.

About four or five years ago, when Natalie and I really began seriously considering conceiving a child together, in an effort to describe the kind of approach I wanted us to take, I told Natalie that I wanted “to get more Cro-Magnon with it.” She laughed and asked for some clarification. As we discussed it further, it became clear that we not only agreed on a general theory and methodology for raising children (as we had already experienced with the two daughters I brought to our partnership), but that we also agreed on our particular roles in that methodology as it applied to a newborn and infant.

I have since then used “Cro-Magnon” as a way to describe our general mind-set for the parenting approach that Natalie and I use(d) with Echo (and to a lesser degree with Xi and Bella), however, I have only once or twice used that description as a suggestion to other parents. One of those parents recently let me know how much the idea of “getting her Cro-Magnon on” helped her find her bearings in the early months of motherhood. It occurred to me then that other new parents might find it help too.

I keep saying “new parents” because I think of the Cro-Magnon approach as one part general theory (more useful in the beginning when one is formulating a general theory), and one part infancy survival information (yes, survival of the infant, but more specifically of the parent). But, truthfully, there is much in the general theory that is applicable at all stages of parenting and childhood. 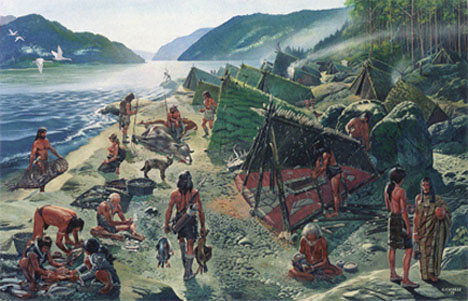 So whether you’re a new parent or old hat, feel free to get your Cro-Magnon on. Here’s the basic idea:

As is (hopefully) obvious, the general idea is to follow in the footsteps of our earliest modern ancestors when dealing with our babies. The reason is simply that their methods were naturally derived. They weren’t just sitting around making stuff up. They weren’t even hypothesizing about it, or creating experiments to see if they could improve the naturally-selected methodology. Cro-Magnon parents were the result of eons of honing of parental processes, and their methods were likely not founded, but were experiential outgrowths that evolved as slowly as the species. I happen to think that has more of a basis and more of a proving than 100 years of psychological philosophizing from the sidelines.

Cro-Magnon Parenting™ — it’s the new oldschool. And it is likely to be the best way to care for your baby and honour your own instincts in the process. Good luck, my fellow cave painters.

º See The Magical Child by Joseph Chilton Pearce for more on the physiological differences between babies born naturally and ones born institutionally with pharmaceutical intervention.

I am a full-time parent of three, Writer, Life Coach, Lecturer, Parenting Mentor, and Shamanic Practitioner. In all of the above, I am seeking to assist my fellow humans in their processes of claiming and unleashing their highest potentials.
View all posts by Nathan M McTague, CPCC, CPDPE →
This entry was posted in Parenting Ideas and tagged attachment parenting, children, cro-magnon parenting™, natural parenting, parenting, parenting mythology, radical parenting strategies. Bookmark the permalink.

2 Responses to Get Your Cro-Magnon On